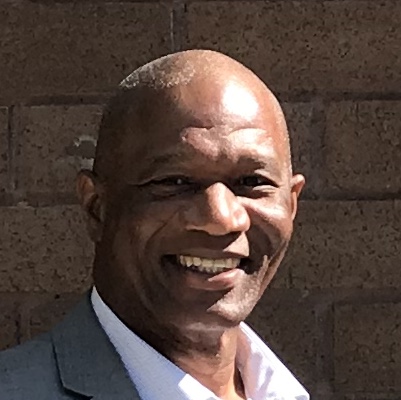 James Mackey, CHW, is 55 years old, and has been married to wife Janet for 26 years.  They have 3 grown children; Chereese, Lanae, and Kevin, and their first grandchild is due in the next few weeks.  James was born in French Camp, California near Stockton, where he now works as a Transitions Clinic Network (TCN) Community Health Worker with Community Medical Centers (CMC).  Before joining TCN and CMC he worked as a peer counselor and housing coordinator serving the homeless of Fremont for Bay Area Community Services.  James was incarcerated for over 28 years but decided early in his sentence to become a better man and to help others to do the same.  Twenty-five years as a participant, facilitator, and mentor in self-help programs, 10 years as a clerk, and 7 years as a mental health aide prepared James for many roles but none could have fit more perfectly than the role of community health worker. Prior to his incarceration, James attended the University of the Pacific (UOP), where he earned a bachelor’s degree in physical education with emphasis in sports medicine.  While incarcerated, he earned a master’s degree in humanities which helped him to gain a deeper understanding of himself and his fellow man and learned the importance of fearless human interaction.  In 2017, James applied and was accepted for entrance into Valley State Prison’s Offender Mentor Certification Program (OMCP) but was happily paroled prior to the start of the program.  While in transitional housing in Stockton, James enrolled in UOP’s Substance Abuse Counselor Certificate program which he completed 6 months later while interning at MedMark.  James plans to take and pass the state certification exam in February of 2020 and continue to pad his resume.